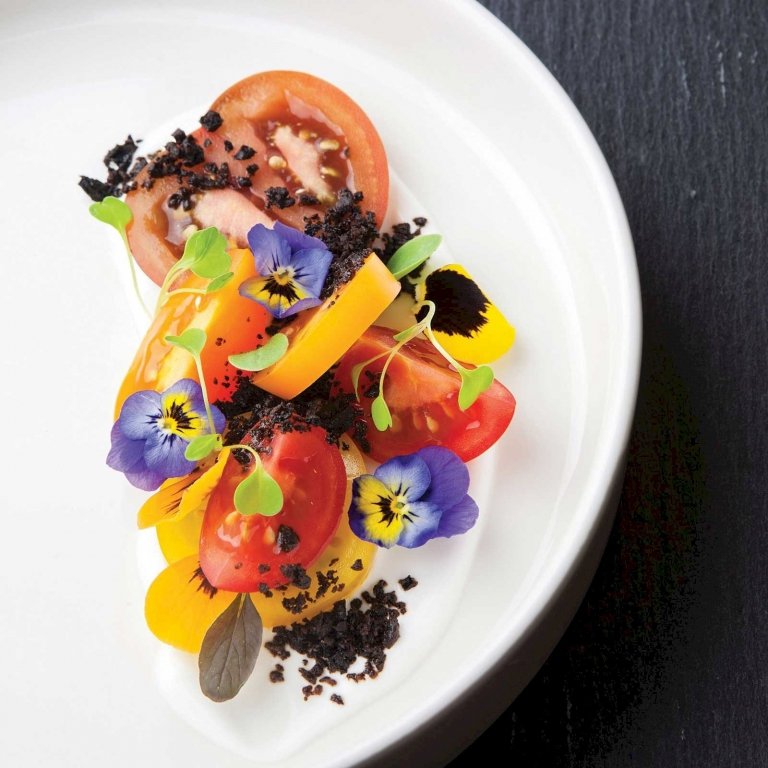 They’re also experiencing a rise in popularity due to their stunning flavour and range of beautiful colours and are now available through most good markets and greengrocers.

For the dried black olive crumb make sure the olives are pitted and rinsed under cold water to remove any brine. Pat them dry and place on a metal tray. Place them in an oven at 40°c and leave them for 8-10 hours. I put these in the oven before I go to sleep at night and remove them the next day. The olives will dry out completely removing all their moisture. Once dried, leave to cool for a few hours out of the oven; don’t chop them straight away warm because this could make an olive paste. Once cool, chop the olives with a knife until they look like an olive crumb. Store in a dry place until needed.

The beauty of this salad is the simplicity of the dish. We are celebrating some great produce here so there is no need to complicate it. The flavour of the tomatoes are incredible so a little olive oil and sea salt is all that is needed to season them. Take your mixed variety of tomatoes and cut them into pieces. If you have big tomatoes, quarter them, a smaller one cut in half and if you have tiny ones just leave them whole. About six pieces of tomato per person is plenty for a starter. Place all your cut tomatoes in a bowl, season with some sea salt and dress with a good quality olive oil and mix gently with your hands.

Take your sheep’s yoghurt out of the fridge and place a tablespoon full on the side of each plate then with a spoon swipe the yoghurt around one side of the plate. Take the olive crumb and sprinkle over the yoghurt and around the plate. Divide the tomatoes evenly between the plates and garnish the salad with some rocket leaves, edible flowers and baby herbs. The colours on the plate are stunning and I can promise you it tastes even better than it looks.