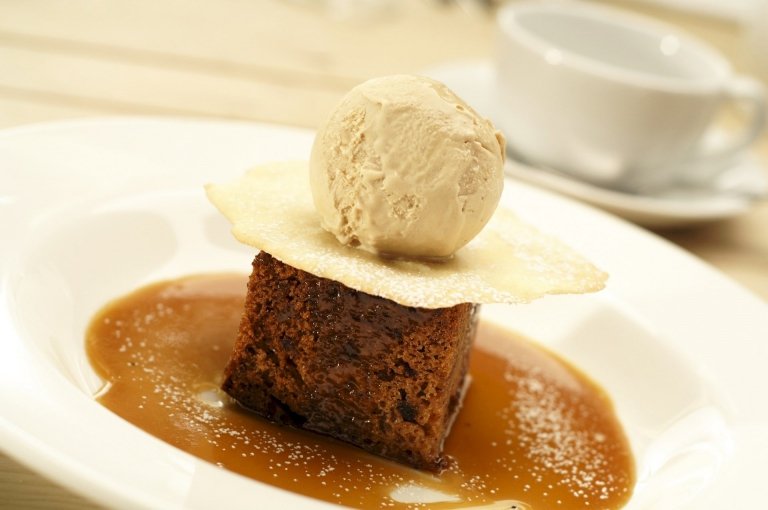 This is the ultimate British dessert and I have had this recipe in my note book for as long as I can remember. It’s never changed; a true great British classic.

For the toffee pudding

For the toffee sauce

This recipe makes at least 10 generous portions but don’t fear, cling film any remaining and place in the freezer for up to 3 months; they make a great snack or quick dessert and children love them.

Starting with the sticky toffee pudding, place the chopped, pitted dates and water into a heavy based saucepan. Bring to the boil and simmer for 15 minutes to soften, after 15 minutes turn off the heat and leave them to cool slightly. Meanwhile, use an electric whisk on a high setting to beat together the sugar and eggs in a mixing bowl until pale in colour. Then turn down to low and add the sifted flour, melted butter, bicarbonate of soda and pour in the warm soft dates and remaining water from the saucepan. Whisk on low for 5 minutes until everything has incorporated into a light brown, fairly thick cake batter. Once mixed, preheat the oven to 170°c. Line a large cake tray with parchment paper, about 6cm deep, 22cm wide and 38cm long; if you don’t have a tray that big use two smaller ones and line with the parchment paper. Pour in the sticky toffee mix, place in the oven and bake for?approximately 1 hour uncovered until golden and brown. The toffee pudding will double in size in the oven so after an hour stick a skewer into the thick part of the sponge and if it does not come out clean, leave in the oven for a further 10 minutes. Once cooked remove and leave to completely cool. Once the sticky toffee has cooled, cut into portions, cling film individually and chill until needed. Freeze any leftover portions.

For the sticky toffee sauce place the butter and demerara sugar into a heavy based saucepan over a medium heat, let the butter melt and the sugar will start to dissolve into the butter (usually after about 5 minutes). Add the black treacle to the pan and bring the mixture up to a simmer, stirring with a wooden spoon constantly. Once simmering, pour in the double cream and bring back up to the boil. Once boiling, turn down the heat and simmer for 15 minutes; you will be left with a dark brown, glossy toffee sauce.

Take the required amount of sticky toffee pudding pieces you need, remove cling film and warm through in a moderate oven for 10 minutes. Place a piece of the pudding on each plate and pour over the warm sauce. Serve either as it is or for a little more indulgence, add some vanilla ice cream or clotted cream.